The Costa del Sol enjoys an excellent climate and the weather in Marbella is no exception. Marbella is the second biggest city on the southern coastline after Malaga.

Both are top locations in which to spend an unforgettable holiday. The glorious weather in Marbella is one of the many selling points of this popular location. The stunning beaches and closeness to the Mediterranean Sea compliment the climate here. Several reasons why this area continues to be one of the top tourist destinations in Europe.

Marbella, like most of the Costa del Sol has on average around 320 days of sunshine per year. The surrounding coastline and inland areas are quite mountainous. This helps to maintain the healthy micro-climate on offer here. Since it’s re-development back in the 1960’s, tourism has become the main source of income. This is also the case for much of the southern coastline. This popular city continues to attract millions of visitors per year.

September is still quite a hot month although things are beginning to cool down. The average temperature in September will be between 22 – 26 Celsius. Plenty of days will still exceed 30 Celsius. September sees around three days of rainfall during the month as we approach autumn. The beaches and tourist spots will be less busy from the middle of September. The tourist high season is now coming to it’s conclusion.

October is an autumn month but there is still plenty of good weather in Marbella to enjoy. The average temperature in October will be between 18 – 22 Celsius most days. There will be a significant increase in rainfall during this month.

Although it will likely for four or five of October, the precipitation level will be much higher. October sees a significant decrease in Sea temperature. The average hours of sunshine per day is begin to drop also.

November is by far the wettest month of the year in Marbella. This month yields a steep increase in the precipitation levels. It will likely rain for around 8 days of November. These days will seem like several months of rain in comparison to previous months.

The temperature can still reach as high as 18 Celsius and into the twenties for a few days of this month. The evenings will now seem much colder so now would be a good time to ensure you have some form of heating. Most normal houses in southern Spain are ideal to keep cool. If you plan on staying in a house or apartment then a gas fire or other form of heating is essential.

The temperature is now dropping towards the end of November. This temperature never drops much below 9 Celsius. This is the case for most of the winter but the evenings will seem much colder. The temperature of the Sea drops also and there are many less hours of sunshine per day. Autumn and winter are not only the colder seasons in Marbella, they produce a lot more rainfall.

December is the beginning of the winter months when the temperature decreases again. The average temperature during December will be between 10 – 13 Celsius. Most evenings will seem much colder as the night time temperature falls. December sees around 6 days of rainfall during the month. The precipitation when it arrives is likely to be much higher than most months of the year.

January is the coldest month in Marbella. The average temperature will now be between 9 – 14 Celsius. Many days will still seem mild but there are around 5 days of rainfall during this month. The levels of precipitation are lower than December but not by very much. The evenings will now seem much colder and the Sea temperature will continue to drop.

Weather in Marbella in March, April & May

March sees the temperature rising again to around 14 Celsius on average. It tends to rain for more days in March than in any other month. You can expect around 8 or 9 days of rainfall. The precipitation levels are less than February so March is still a drier month. The evenings will seem much warmer now also. The heating will not be as essential as previous months.

May is one of the better months to pay a visit to Marbella. The tourism season is beginning and the temperature is creeping up. Normal temperature during May is between 18 – 23 Celsius. This will continue to get hotter as we approach the hotter summer months. There is still some rainfall around during May. Only a few days worth which will arrive earlier in the month.

The weather in summer in Marbella is exceptional but can get very hot in the months of June, July and August. During these hotter months, the temperature will often exceed 35 Celsius. It’s common top 40 Celsius on occasion. The surrounding Mediterranean Sea makes things a little cooler with the Sea breeze.

The summer months begin in June along with the tourist high season. The warmer weather tends to hang around until October at least before things begin to cool down. Below is a little information about what type of weather to expect during the summer and autumn.

June is when the summer begins proper as Marbella is approaching the tourist high season. The average temperature is usually between 23 – 27 Celsius most days. It’s normal to expect plenty of days when the temperature will exceed 30 Celsius. Towards the end of the month the temperature can reach the mid-thirties on occasion. June sees around two days of rainfall throughout the month. There is very little precipitation when it does arrive.

July is the height of summer in Marbella and also the tourist high season. The average temperature is between 25 – 29 Celsius. This will often be well above 30 Celsius for most of the days during this month. It’s also common for the temperature to exceed 35 Celsius during July. This will likely approach 40 Celsius towards the end of the month.

It’s worth mentioning that there is no rainfall during July. and the The evenings can be hot also which can make sleeping uncomfortable. It’s a good idea to make sure you have some type of air-conditioning or fan at your disposal.

August is usually as hot as July with an average temperature of between 25 – 29 Celsius. The temperature for most of the days during the month will exceed 30 Celsius. August will yield plenty of days that are over 35 Celsius. It’s not uncommon for the thermometer to top 40 Celsius during August.

Like July, there is no rainfall during August. The evening temperature will continue to be hot also. The temperature of the Sea is at it’s warmest in August also making it ideal for plenty of days at the beach.

The chart below gives a rough idea of what monthly weather average you can expect. The chart also displays hours of sunshine and expected days of rainfall. Please click for bigger image of chart. 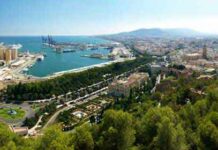 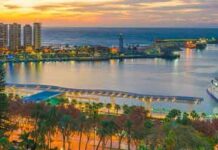 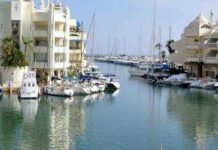