Home Articles Puerto Banús Marina and Things to do

The marina and coastal area of Puerto Banús lies on the southern Mediterranean coastline. This popular location shares a border with the city of Marbella on Spain’s Costa del Sol. The marina here takes it’s name from the property developer José Banús.

Inaugurated in 1970, this luxury marina is also a large entertainment centre. One of the largest of it’s kind in southern Spain. Everything here is about luxury and little else.

Built to be a luxury marina and shopping complex, Puerto Banús welcomes over 5 million visitors each year. Aimed at the rich and famous, here there are many expensive bars and restaurants. This exclusive area also boasts top hotels and trendy shopping malls.

The marina is the location for some of the worlds most luxurious yachts. The streets around the marina are usually full of expensive super cars.

In fact, the streets of Puerto Banús in summer look more like a car dealership. The top car makers showcase their super cars hoping to catch the eye of the rich and famous.

It’s common to see all manor of luxury vehicles here. These include Rolls Royces and Mercedes Benz. There are always plenty of high end sports cars such as Ferraris and Lamborghinis.

The official opening ceremony back in 1970 was a star studded affair. Providing the entertainment for the many famous guests was Spanish singer Julio Iglesias.

Things to do in Puerto Banús

Most of the things to do in Puerto Banús involve shopping, bars, and the restaurants. The beaches here lie either side of the marina. This luxury location benefits from the beautiful Cordillera Penibética mountain backdrop. The mountains are to the north with the Mediterranean Sea to the south.

The famous “Golden Mile” extends for almost 5 miles from Marbella to Puerto Banús. Away from the shopping scene there are plenty of companies offering various tours. These include boating, fishing charters and biking.

There are 3 popular beaches in the area to spend your day relaxing and working on your tan.

Playa Nueva Andalucia is a sandy length of smaller connected beaches. These are on the western side of the marina. The mountain backdrop is spectacular here as the beach bars supply some refreshments.

Playa Puerto Banús is another of the popular sandy beaches with views of the mountains. This beach is family friendly and located to the east side of the marina.

Playa Río Verde is a Blue Flag certified beach for safety and cleanliness. Rio Verde translates to “Green River” in English and there is a good reason for this. To gain access to this beach you must cross via a footbridge over the small river. This little river contains an assortment of birds and other wildlife.

The Golden Mile stretches for almost 5 miles or 7.8 km from Puerto Banús all the way to Marbella City. To walk the Golden Mile will take you around 2 hours but there are many things to do and see along the way.

It’s possible to see across to Gibraltar if you coming in the opposite direction. This is a real eye opener if and have never seen the rock before. There are also plenty of beautiful beaches and attractions along the way. There are also an endless amount of expensive designer shops that line the street. These include Gucci, Christian Dior and many more fashion boutiques.

Please click the image to be take to a full size interactive map of Puerto Banús. 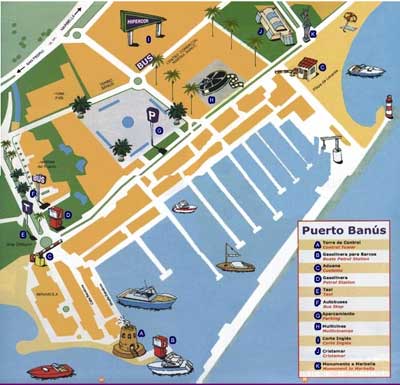 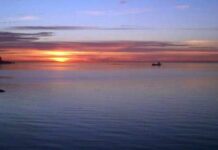 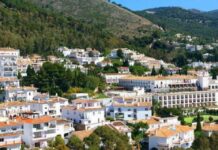 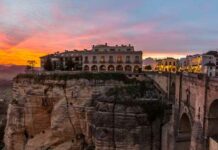 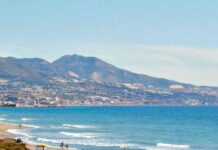 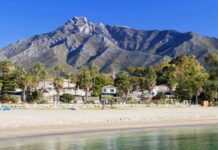